The next Honduran Island - Roatan!

A gentle day sail brought us to Roatan. Knowing that jet aeroplanes fly in to Roatan I was expecting it to be "developed", in a way that I was not expecting to enjoy. In contrast to Guanaja, there are roads and traffic jams, supermarkets and tourists. However, it is all very low key, and the slightly elevated level of development gave us opportunities. We were able to hire a car and take buses to explore, and Andy was able to resume his interest in diving.

Our first stop was at the rather dull-sounding anchorage of Jonesville. The southern coast of long, thin Roatan is deeply indented with inlets - Bights, which, if depths and gaps in the coral reefs allow, make for superbly sheltered anchorages. (Curiously reminiscent of the rias of my home county of Cornwall).


Jonesville Bight has a tiny 4-slip marina on one shore, and a small fishing harbour on the other. The various bights along the coast are linked to each other by a series of canals - with mangroves lining the banks on either side in some places - 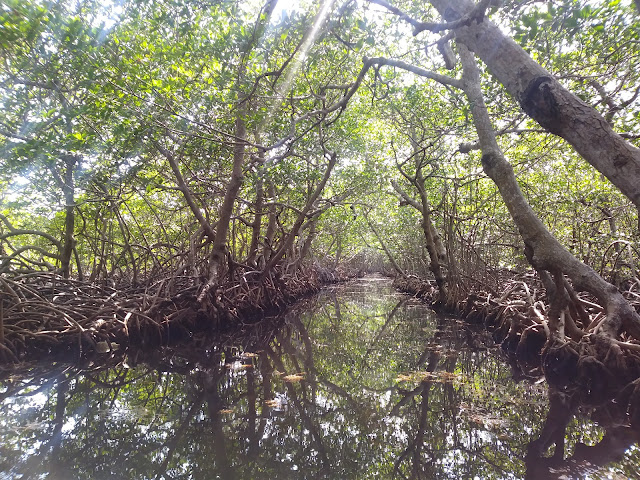 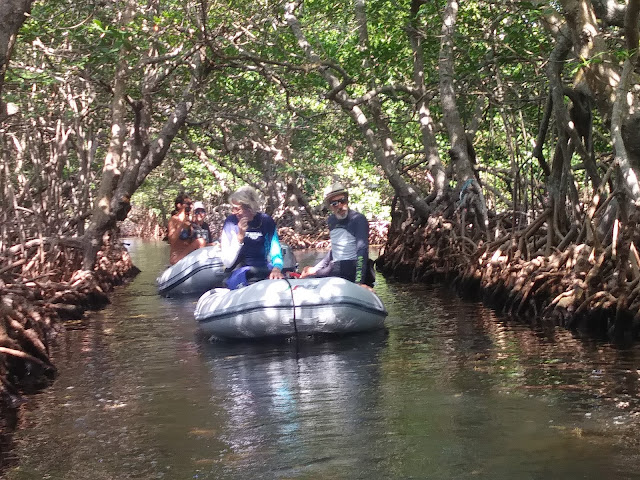 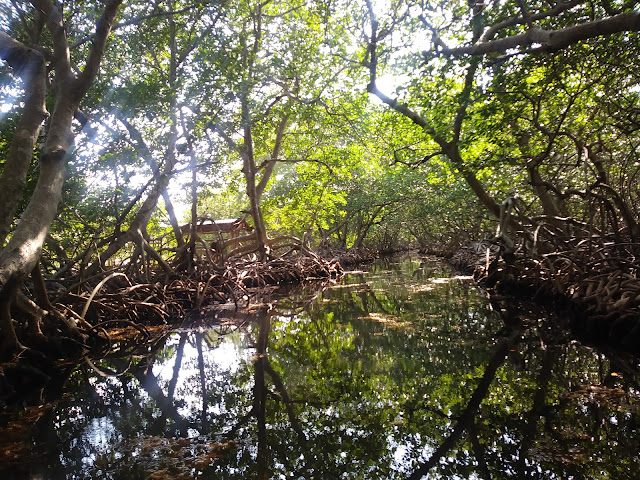 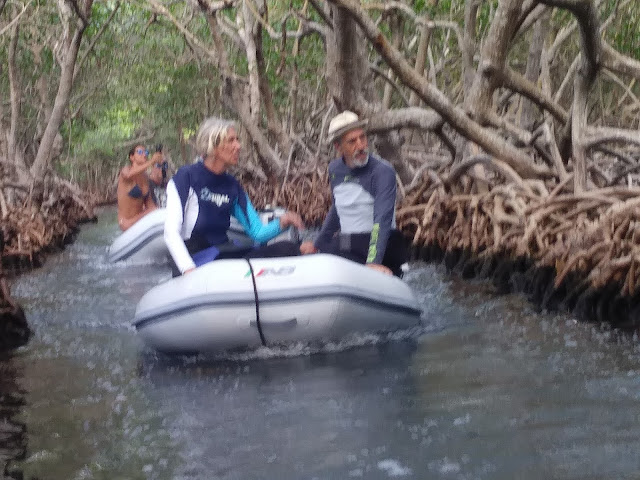 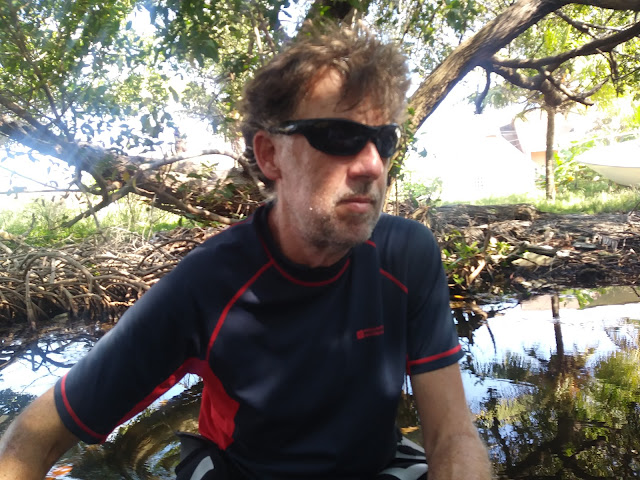 whilst in other places houses and small business had sprouted up. The canals are much too shallow for Tintamarre - but were fun to explore with a dinghy.

One expedition took us to a good snorkelling spot out on the reef in another bight. Another took us to a small village community where we stopped for a chicken and chips lunch and were urged to return later in the week for roast iguana or fresh turtle. (we weren't tempted) and watched the villagers wading back and forth across the canal - there were no bridges. 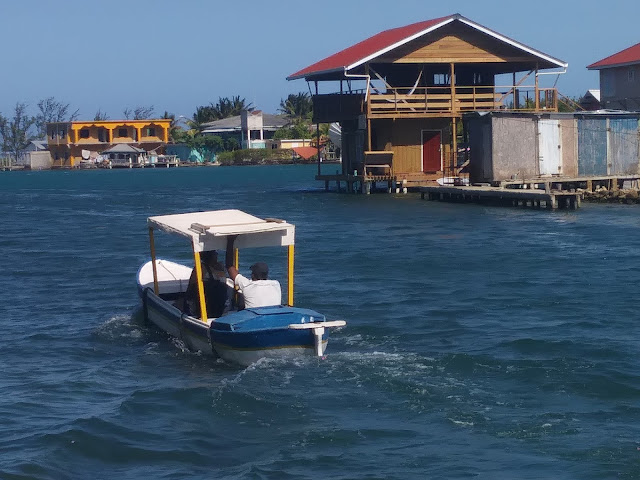 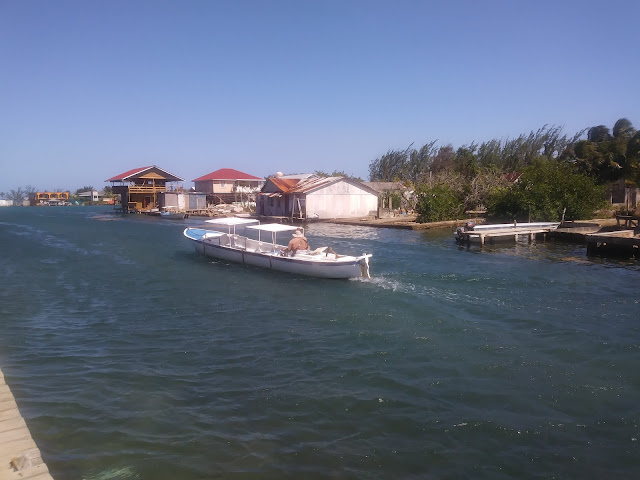 Hiring a car with friends allowed us to drive to the very tip of the eastern end of the island - where the roads became unpaved, steep and rutted - and a string of beautiful almost deserted bays tempted us to pause for a swim and lunch. 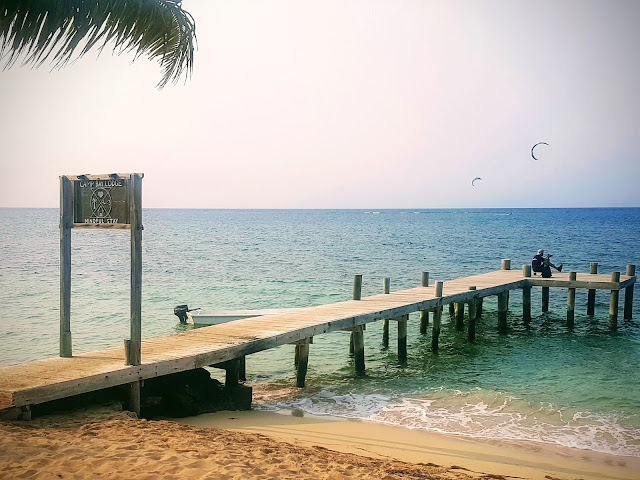 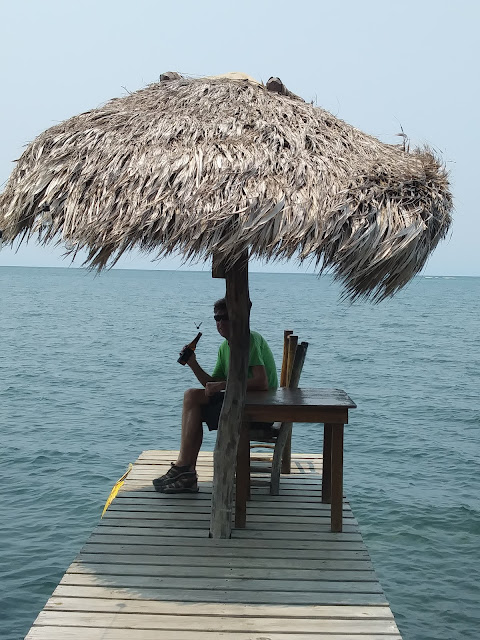 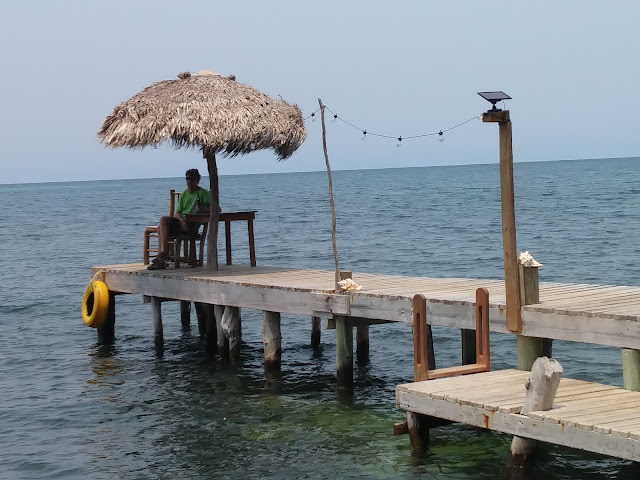 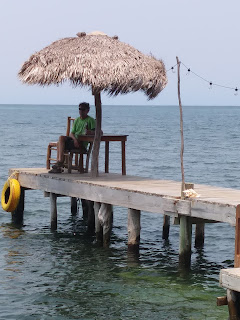 More prosaically we could drive to a well stocked supermarket and refill our food lockers with provisions. (though of course all purchases had to be lugged down the path to the jetty, loaded into our dinghy and hoisted ship to ship onto Tintamarre.)

A week into our time on Roatan we decided to sail to West End, Roatan and enjoy the snorkelling and diving opportunities there. Our departure from Jonesville was delayed by the failure of the windlass. With some much appreciated help from our rally friends the dodgy electrical relays were renewed in record time. Our gentle down wind sail then became an unofficial race between ourselves and Wild Iris. They chose to goose-wing their sails (genoa poled out to port and mainsail rigged to starboard - whilst we put both sails out to starboard. Wild Iris had chosen well and although we slipped into the anchorage through the gap in the reef first, they had set out some time after us. 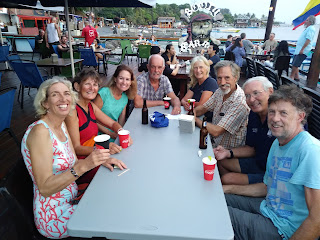 West End is a lively diving and tourist oriented community. Unsophisticated, colourfully painted wodden shacks were strung along the beach selling superb inexpensive food and drink. Dollar buses ran every few minutes to the main island town of Coaxen Hole. Andy enthusiastically embraced the opportunities to take up diving again with the support of rally friends - and bought some excellent kit here (on the basis that it will be useful to clean the bottom of the hull). I was very happy to snorkel just off Tintamarre's stern - or take the dinghy just a short way and tie to a dive buoy - to access beautiful coral reefs and wonderful coloured fish in the clear, warm sea.


As a change, one day I went with a friend on the dollar buses, travelling for several hours across the island to a Garifuna village. The Garifuna are an ethnic group descending from African slaves intermarried with the Carib communities  of St Vincent in the eastern Carribbean And expelled to Roatan (and other lands in this part of central America). The Garifuna are a colourful people, with their own language, customs and cuisine. It turned out that Lisa and I were too late for the festival that we had planned on taking part in, but were still able to sample some delicious tapado (coconut, fish and conch soup) served with machuca (a yukka based carb - rather stodgy for our tastes). 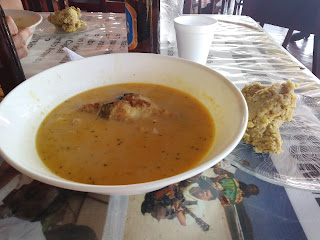 The carefree days in this anchorage came to an end with our commitment to sail to Belize. Checking out of Roatan proved to be a long winded process - partly because the authorities in Guanaja (also part of Honduras) had issued the correct paperwork but not entered our details onto the countries immigration data base. All was eventually resolved, the dollar bus found to take us back to our anchorage, and the next evening the windlass performed beautifully to raise the anchor for our overnight sail to Belize. As we slipped through the reef out of the anchorage we were joined by a pod of dolphins who played alongside for 20 minutes or so, before leaving us for our last night sail of the season.