Recovering from 7 months in Storage

Boats don’t like being left alone, especially in a working yard.  Dirt gets into everything that water and wind will carry it and insects reach beyond into the tiniest hollow or to block any exposed inlet or outlet.  Corrosion continues unabated, in the warm, salty air of the South Pacific summer.   Tintamarre was well looked after and covered from the power of the tropical summer sun.

We arrived back at the boat in early June and despite a long-planned maintenance list Tintamarre was ready to splash within 10 days of our arrival.   The maintenance list was extensive, but the yard had been efficient and had everything in hand so that we were not delayed in launching.  The new sail and sail bag were fitted while we were in the launching dock and then we were free to leave for the anchorage.  What could possibly go wrong?

Time to Splash - Down the ladder for the last time this year (we hoped). 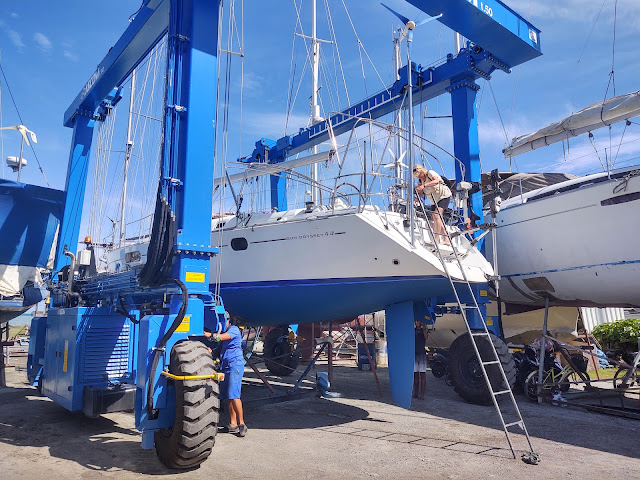 Just room to manouevre the boat out of the yard 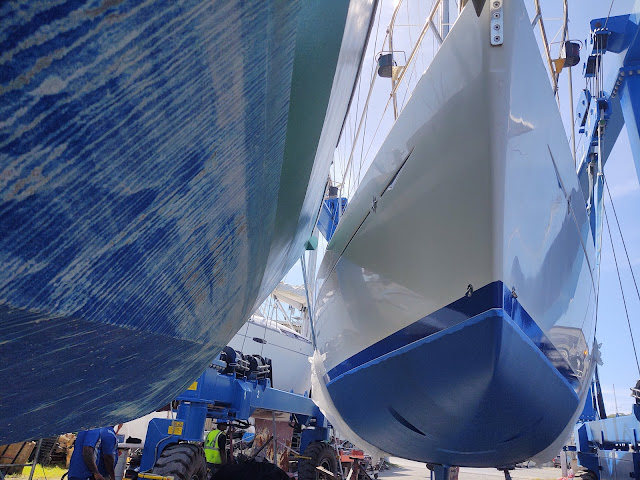 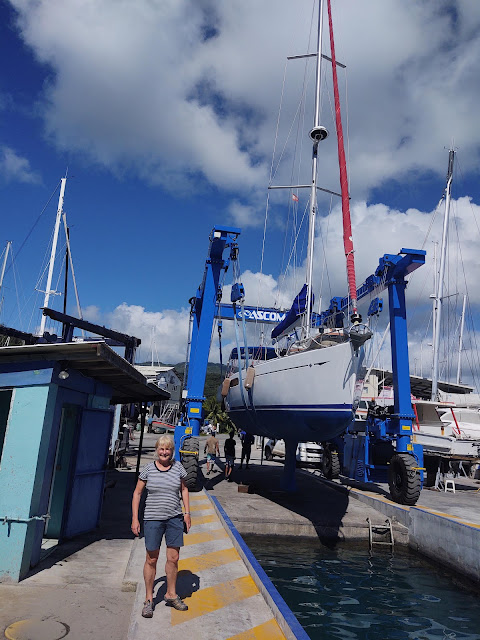 Installing a new autohelm computer in our cabin 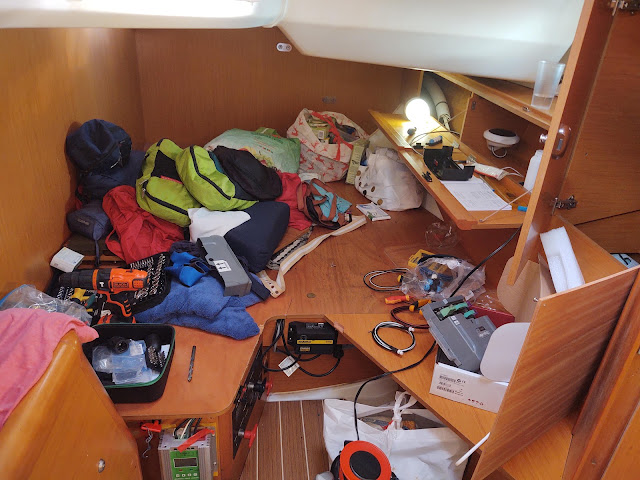 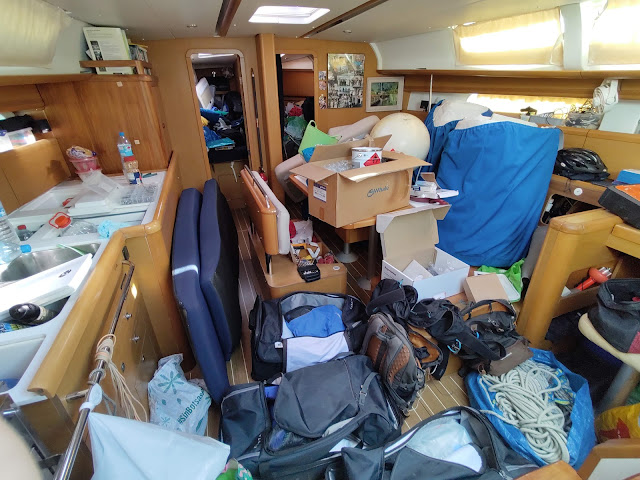 We had planned for a few weeks at anchor close to the yard where we could buy spares and get assistance with any small issues that needed to be addressed before we could set off for Huahine or Bora Bora.   What we had not planned for was for our dinghy to be T-boned on the dock, the front tube bursting at the seams and looking as deflated as we looked when we returned to the dinghy with a week’s shopping and two bicycles to transport back to the boat.  With assistance from Minke and Jaap on Eastern Stream, we were able to return everything to the boat and haul the dinghy on board waiting for repair. 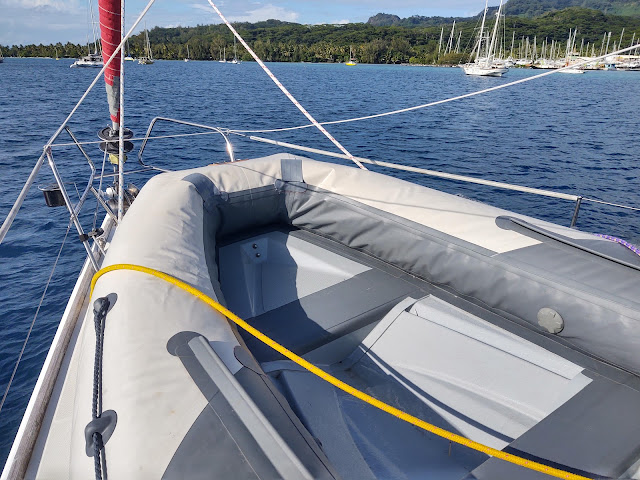 The Russian glue that came with the dinghy was old and more like polystyrene cement leftover from the days of making Air Fix models.  Glue was soon everywhere but in between the seams where it was needed.   A tougher approach was needed.  A two-part glue was ordered to arrive by ship or maybe by air from Tahiti and minor surgery performed on the dinghy to allow better access to the seams.   Sadly, no matter how effective the gluing turns out to be the dinghy is now sporting its first few inevitable patches.

The anchorage is well protected from the ocean swell by wide reefs but suffers from strange currents, that are in part tidal and in part caused by the outflow of water arriving within the lagoon from waves breaking over the reef.   These currents cause Tintamarre to dance around one way until the wind blow against the current and then we dance in the opposite direction. Heavier boats, especially those with long keels, tend to sit with the current.   Instead of being 70 metres from the closest boat, we found ourselves about to collide, at two in the morning.   We had to move.

To set the anchor you reverse back with increasing power, helping it dig itself in and testing that it is holding at the same time.   Except for this time, we seemed to spring forwards, the current couldn’t be that strong.   Disorientation and cognitive dissonance take over, but eventually after revving the engine, trying forwards gear the only remaining explanation is that the prop has fallen off.  A quick dip in the water and sure enough, no propeller.   We were though anchored even if the anchor was not fully set, and it was between 12 and 20 metres of clear water beneath the boat.

The yard did a magnificent job of recovering the propeller and rope cutter and then pushing us into the haul-out dock with a small dinghy for the propeller to be replaced.   The cause, someone (Curacao, Guatemala, or Panama) fitted too small a locking bolt.   We are lucky this happened on a calm day in clear water, close to a maintenance yard.   Anchoring in a strong wind, close to a reef this might have been very different or simply losing while sailing and starting the engine expecting power on the approach to an entrance to an atoll in breaking waves.   From now on we will check that we have power and not simply that the engine starts before starting a difficult manoeuvre. 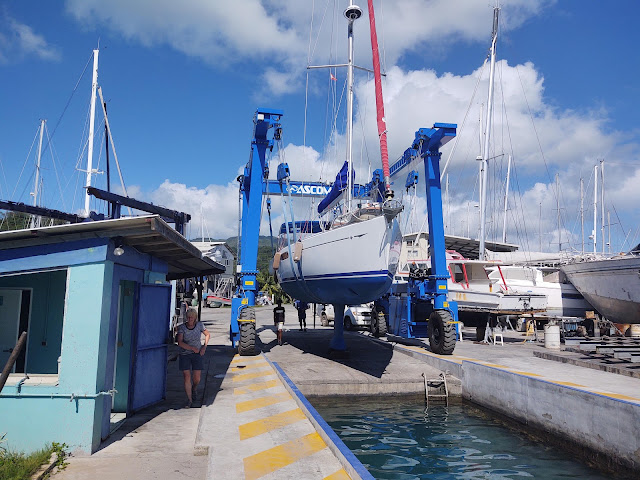 Back in the anchorage, the same day, we noticed a small coolant leak from the engine.  The wind a current continued to confuse us and we were up for a few hours motoring away from two boats that refused to dance to the same tune as us.   Whilst we were able to use the engine,  coolant was leaking and evaporating faster than I realised.   What should have been a simple fix required half the cooling system to be dismantled and glued plumbing connections replaced with plumber's tape.  Again, some poor work, this time directly attributable to when the new engine was installed.   Glue is not a substitute for plumber’s tape.   The joints had come loose when the hoses were removed as part of a major engine service and once the glue seal was broken nothing except stripping down and starting again will fix the problem.

Two weeks on and we are still at the same anchorage, on our second attempt at fixing the dinghy and now waiting for a part to fix a fuel leak on the backup outboard engine.   The electric Torqeedo (outboard) is making some horrid noises from its gearbox – I think it will soon be on the maintenance or replacement list.

With lots of small tasks to be done onboard our days remain busy, and we have found this anchorage to be pleasantly sociable.  Strong winds have pinned us down in the boat for a few days too, progress is slow but exploring is still ahead of us.  Just one more push and we will be sailing….

Views from the Anchorage 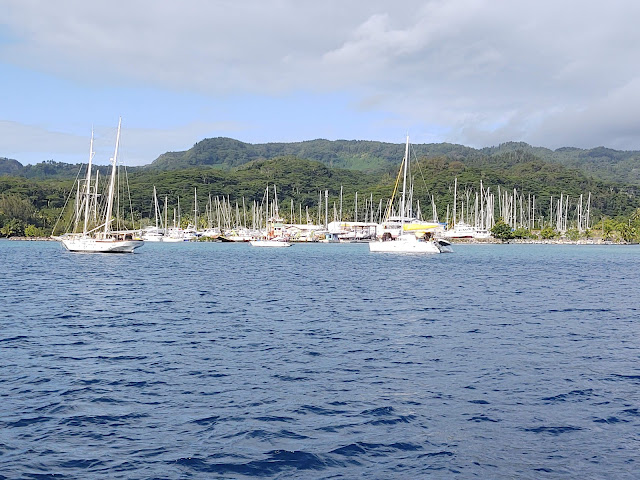 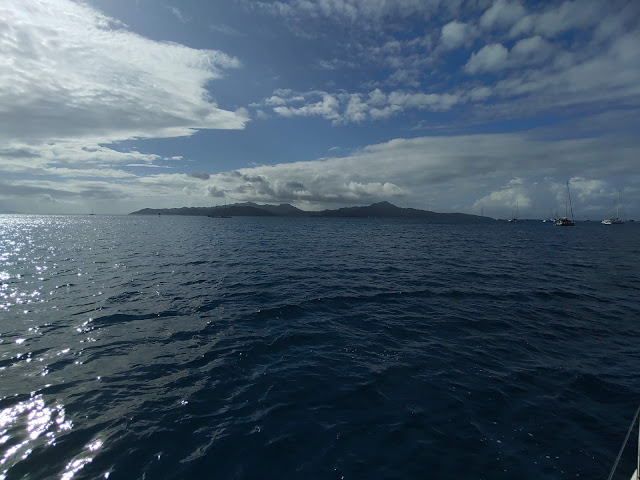