Panama Canal Crossing and the Story of the Little Red Boat

Unlike the man that went up a hill and came down a mountain, the workers on the Panama canal went up a mountain and many never came down, the rest left a canal behind for us all to enjoy, and they did it almost entirely by hand.   Over 12,000 workers died during the building of the canal, but this is far fewer than the 22,000 workers that died in the failed attempt by the French to build a sea-level canal.  The French may have failed but so much was learned that some credit for the eventual success has to be given for their failure.

Gliding through Gatun lake or through the Culebra Cut one cannot appreciate the work involved the calm flat waters conceal the deep cuttings below and the mountains above are, well, gone.


The scale of the locks can only be appreciated from inside them.  In such a strange environment it looks normal to see small electric railway engines climb 45-degree slopes between the locks. 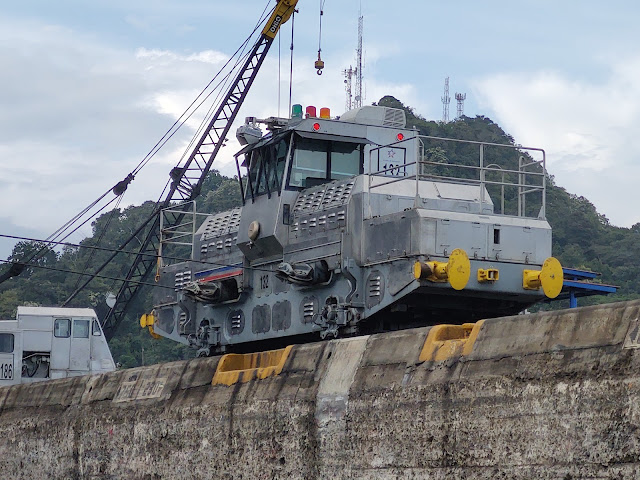 These engines tow the boats through the locks, though in the new Panamax locks they use tugs, as the advisors said,  “to be different”.   The engines’ drawback is their cost but they allow for ships to be packed tightly together, something not needed in the new locks as only the largest vessels can use them.

For more information on the canal see this history of the Panama Canal.

The story of Tintamarre and the Little Red boat 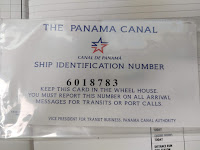 It is quite easy to say we will transit the Panama Canal, as if cruising the UK canal network.  But sailing boats are not designed to go into sea-going locks and the largest ships are uncomfortable having small boats under their bows.  We, however, seemed quite large compared to a little red boat called Colibri that was destined to transit the canal with us.

The little red boat was feeling sad because it saw all the sailing boats come and go from the marina in Shelter Bay and never knew where they went.  But one day, a nice French girl, Chloe, said – don’t worry little red boat, I will take you through the canal.  So she filled in all the paperwork and said that the little red boat could motor at 5.5 knots, had holding tanks and could go in reverse.  Everyone was happy, especially the little red boat who had never been to the Pacific before so she was able to set off with her new friend Tintamarre, who looked very big and grown-up until she passed a cargo ship. 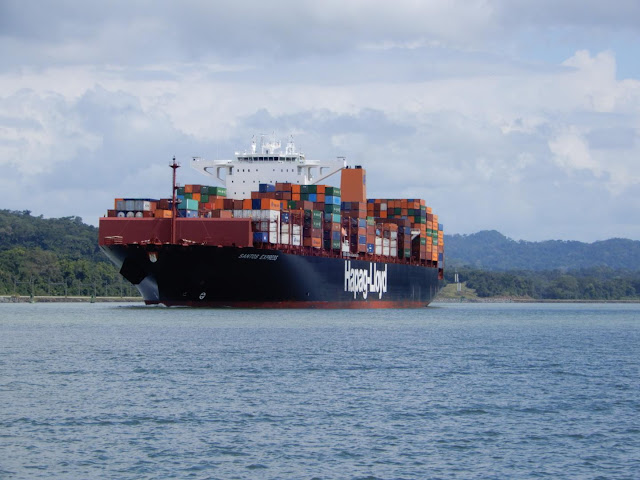 Setting off the little red boat, looked just a little crowded with 6 line handlers and the Canal advisor.  She was loaded with 4, 30-metre lines required to secure the boat and 8 tyres acting as giant fenders. 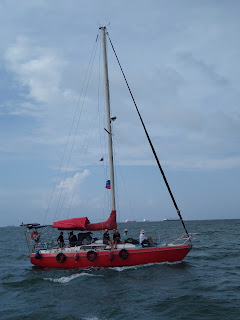 A few days before the transit we were officially measured and given our Ship’s number for the transit.  It is normal for sailing boats to transit the locks “nested”, with up to three boats rafted together. We had practiced this with our friends when we acted as line handlers so we thought we knew what to expect, how wrong could we be?

We rafted up with the little red boat below the first lock and waited for our turn to enter, behind 2 ships and two tugs.  Except that there was no room for us in the lock.

Four hours after setting off for the 5 miles to the locks, and in the rapidly descending darkness, we were still going round in circles with the little red boat tied to our side.  The big ships were finally shuffled forwards providing enough space for us to tuck in behind them and in front of the lock gates. 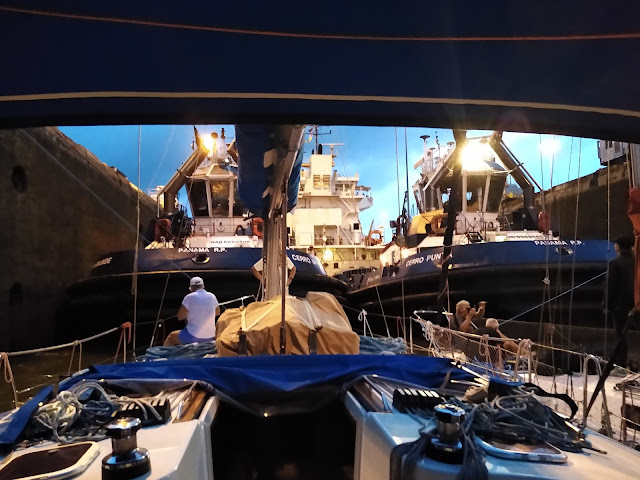 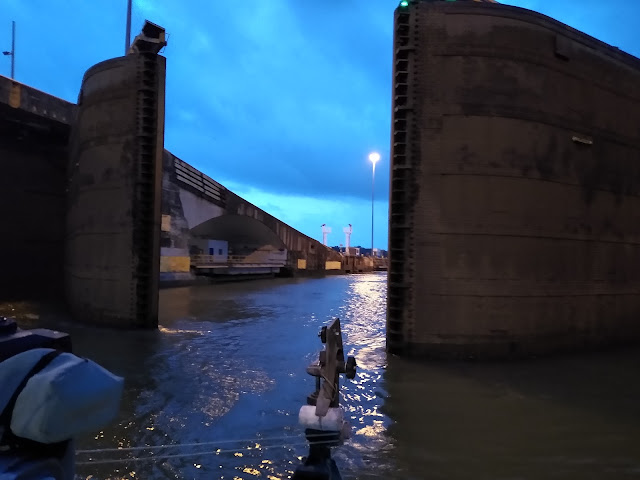 And then it rained tropical rain for the entire passage up to the Gatan lake where we moored overnight with us tied to a large and somewhat surreal blow-up mooring ball. The happy little red boat tied to us and the two boats spent the night chattering away as they rolled in the wash of passing tug boats.

The next morning we were given a late start for our transit of the canal to the Pacific locks so we had to make good speed to make the appointed time in the locks.  Fine for us, but for the little red boat that had never motored 26 miles in her life and certainly not at 5.5 knots, something had to change as they fell behind us and behind schedule for the descent to the Pacific.  One might say the little red boat cried and cried because she thought she would be left behind on the lake, never to be seen again.

We will never know whether it was the boat's charm or her skipper’s smile or another Gaelic shrug, but looking behind us we could clearly see sails on the lake.  The little red boat was sailing.  It is normally, always, forbidden to sail on Gatton Lake, which is a shame as it is a beautiful lake with lots of inlets to explore but ships and little boats are not allowed out of the main channel.  But the advisor on the little red boat, a trainee pilot, had against all protocols called canal control and obtained permission to sail, the little red boat would go to the ball after all, and her sails were raised and with smiles all round she flitted across the lake.
We were soon re-united with the little red boat as she chugged through the Culebra cut towards the Pacific locks. 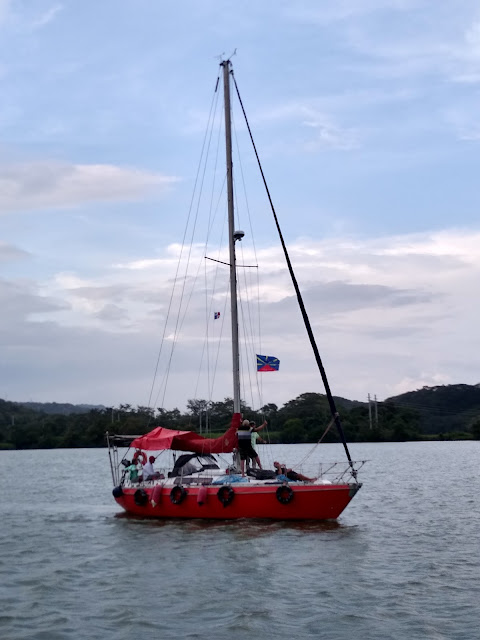 Both ourselves and the little red boat were lucky to have trainee pilots on board and not the pleasant but less skilled advisors we had been told to expect.  Trainee rather understates their skills as they were both full Ships Masters, ours had been the executive captain (second only to the full captain) on a cruise ship before starting his training.  These trainees would soon be guiding LPG carriers, car carriers, and huge container ships through the locks taking full responsibility for the ship.

Our advisors, either to have some fun or to practice new maneuvers, arranged for us to go down to the Pacific with a commercial catamaran. 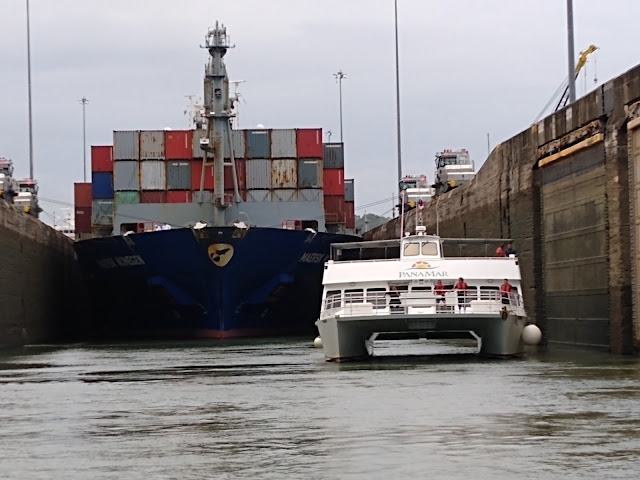 This boat would attach to the walls of the lock and let down on ropes closely attached to the dock wall.  We would dock with it as if it were a floating pontoon.  Simple as this sounds, they always had to go first – but they couldn’t move until we had undocked from them.  To do this we had to go backwards.  Except when we practiced outside the lock we found the little red boat didn’t really know how to go backwards, certainly not against the mysterious currents in the locks.  So we were given the task of reversing as a raft and one case where we had to change sides, ejecting the little red boat into the current only to catch her again as she was carried past us in rapid currents that flow through and around the locks. 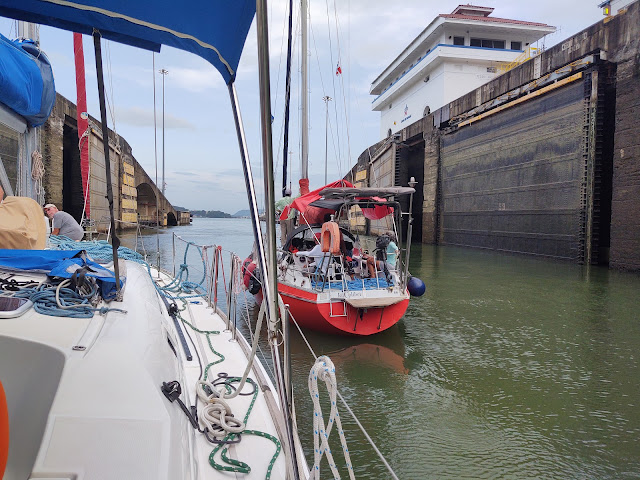 Docking involved approaching the catamaran with as much control as possible when docking with the current, something you should not try at home.  As the advisor said nothing can go wrong if they catch the line as we floated past rather too fast.  Each time the lines were caught, the cleats held and the little red boat found just enough power in reverse to help us steer backwards.

On one occasion we were forced to go under the bow of the ship behind us, our mast just missing the overhanging bow while the catamaran released itself from the side wall.

Some 24 hours after entering the canal we dropped out into the Pacific, at the top of a 5 metre tide as darkness fell, this time the little red boat leading the way out. 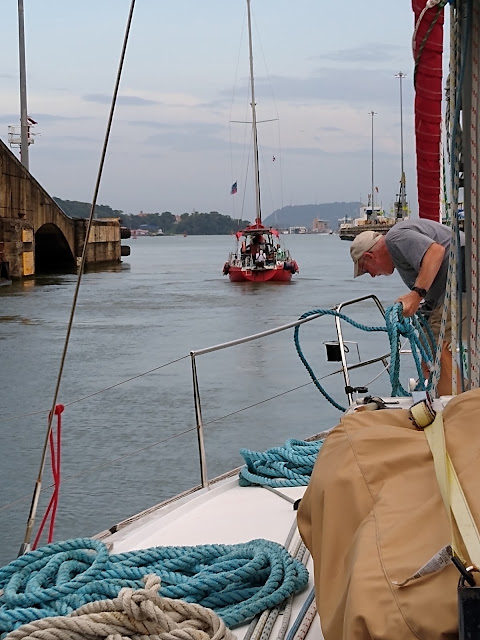 As we ran the last few miles a large canal authority boat ran alongside us and the advisor, arm held outstretched and gripped by the crew on the canal-authority boat leaped across the void. The little red boat and Tintamarre said goodbye to their line handlers, advisors, the lines and each other at the World Famous Balboa Yacht Club ready to start their next adventures, hoping to meet again somewhere in the Pacific.

A technical note on currents in the locks
Everyone knows that when the lock gates are closed and water is flowing in and out there will be strong eddies and current but when the gates are open, the water is level, then it should be calm?  It is like a piece of magic because before one's eyes the calm waters start to flow, first slowly then rapidly.   You have to move before the current gets too strong.
These mysterious currents happen because one is descending in a lock full of freshwater to meet a lock or the ocean filled with seawater.  These two masses of water with different specific densities are lying next to each other.  The freshwater wants to rise to the top, so it starts flowing forwards over the top of the saltwater with increasing speed as a circulating current is established with the top layer moving forwards and deep down in the lock the saltwater moving backwards, taking only a few minutes to become a torrential rush to the downstream end of the lock.  If you are not tied up before this flow gets going you end up in the lock gates.  The failure of the catamaran to move off promptly left us managing these currents as we were delayed long enough after the gates opened for them to start flowing, well beyond the capabilities of the little red boats reversing powers.