Ahe - Tintamarre in the Tuomotus

Our Pacific crossing blog is a work in progress but here is an update on one of our adventures since arriving in French Polynesia.

The Tuomotus are a sprawling archipelago of low lying coral atholls, lying about 500 miles south and west of the Marquesas. In the past they were often by-passed by sailors, as the coral reefs were treacherous before the days of good charts, modern buoyage and GPS. We heard of their beauty, and the friendliness of the people living there, and decided to make a stop at the atoll of Ahe on our way to Tahiti. 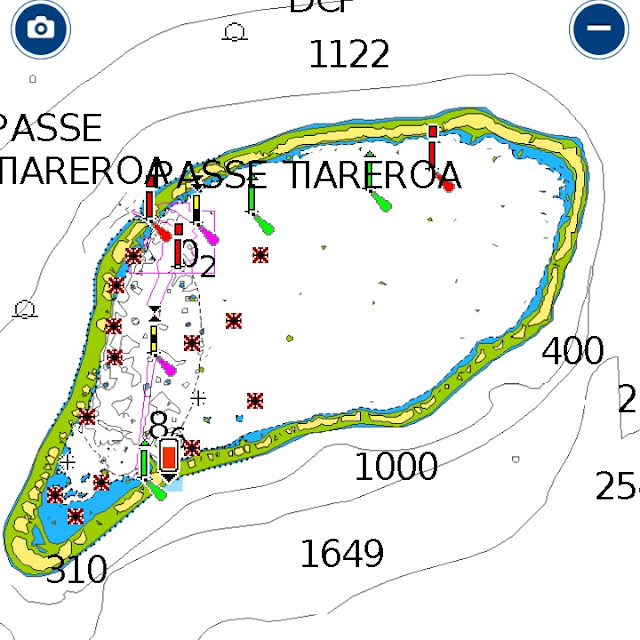 Despite choosing a favourable weather window for the three day sail we found our trip rather unpleasant. The winds gusted up to 40 knots (that’s a gale) and the sea was often confused with big waves coming from all directions, often slopping over the decks, and sometimes over us. It also rained. You can't just turn it all off but have to keep going through night and day, time to wonder why on earth we are putting ourselves through this, but when the wind stops and you are anchored in the calm of a protective coral reef the hard times are quickly forgotten.

We timed our arrival carefully for entering the pass though the coral reef into the lagoon. Atoll passes are notorious for strong flows of water with the tides, making them dangerous at times of peak flow. Slack water (high or low tide) is the time to clear the pass. Fortunately no problems for us, and we were able to follow the channel markers through the lagoon safely to the village anchorage.

The atolls comprise a string of small islands or motus forming a circle around the lagoon. The lagoons are punctuated with coral heads – or bommies – potentially lethal for navigation and tricky for anchoring near.

The principle motu of Ahe, Teararoa boasted a small village with a couple of small grocery stores, a pink painted church, a school and a sturdy dock to receive the twice monthly supply ship.

On our second morning the supply ship arrived, causing a big stir amongst the locals, who hurried over from their motu homes in launches to collect supplies with excited children in tow. The boat crew set up a small stall from which we bought eggs, vegetables and a bunch of small sweet pineapples.

A stroll along the sandy paths through the village took us to the next motu by bridge;- a coconut farm, where copra (the dried kernel of the coconut) is harvested and sold for oil production.

Tourism is a small industry on Ahe with about 15 guests a week arriving by plane to stay at a small guesthouse on a distant motu.

The principle industry of Ahe is pearls. We were very lucky to be invited for a day out to see a pearl farm. A former village chief, Arrii, took us to visit his family and pearl farms on various motus.

We went in his launch, as it is impossible with a yacht or a little dinghy. The extended family has what looks like an idyllic life on their castaway island, but in reality it must really be tough! Arri's family raise pigs, goats and chickens on their motu, and have endless supplies of coconuts. His daughter baked a delicious cake for us. Fresh fruit and vegetables are scarce and extremely expensive. Children go to school by boat - but it was school holiday time whilst we were there. 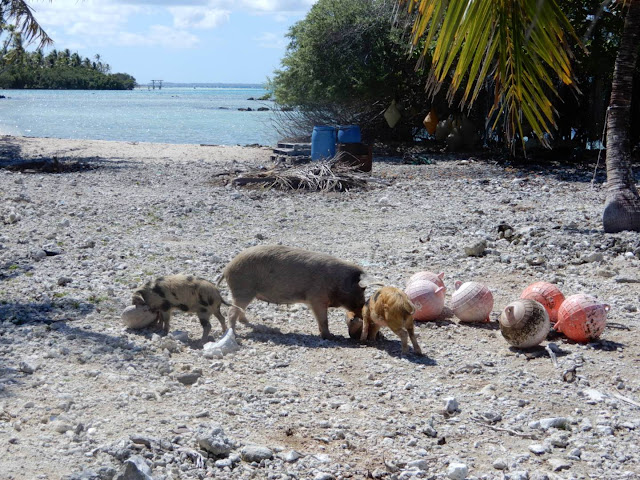 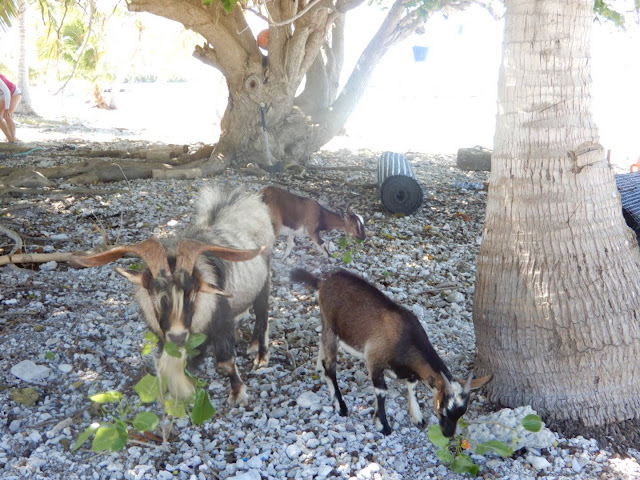 They manage the pearl farm... a really a different thing from the images in my head! They look after thousands of oysters held in plastic net buckets of 25 oysters each suspended on lines, at a depth of about 8m (25 feet). 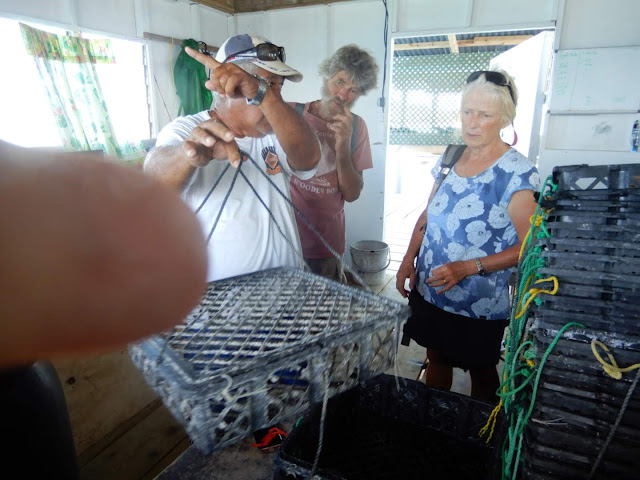 The web of suspended baskets is mind boggling. We donned snorkels and masks to inspect the submarine farm. All the oysters need to be cleaned regularly - a full time job with sharp knives that all the family joins in with. 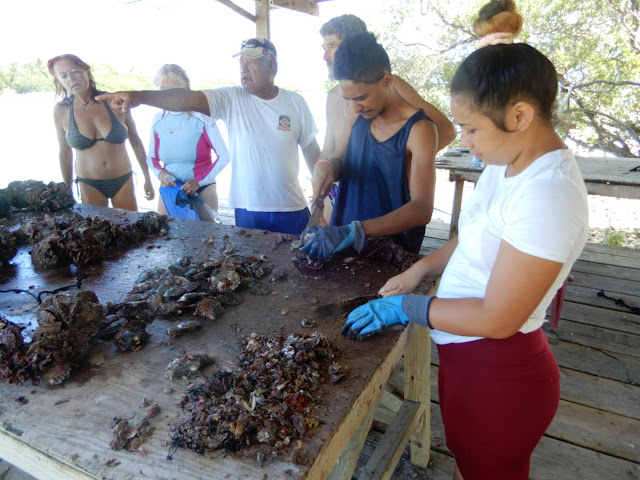 Every year they take up all the oysters, bucket by bucket to take out the pearl that has grown around the implanted bead, and replace it with a new bead the same size as the pearl that is removed, allowing for a bigger pearl to grow. And there you have it; cultured pearls. In Ahe these are all black pearls.

Covid has been a huge problem, as it is workers from China who usually come in to do this grafting work in February, so you can imagine this year has been a mighty headache - as people locally are not skilled enough to do the work well or quickly enough. Somehow they muddled through this year (Arrii normally employs 10 Chinese - we saw their very simple living and working quarters out over the sea).

There were almost no pearls available to buy.  They are all sent off for export, in this case Dubai with huge tax markups at every step. We were able to buy a few (not expensive) and were gifted some too.

The people of Ahe were some of the most friendly and welcoming people we have ever met. They were all enthusiastically chatty, and several times we returned to the boat laden with fish for supper. Watching the locals play boules as the sun set over the anchorage was a pleasing end to a wonderful day out.