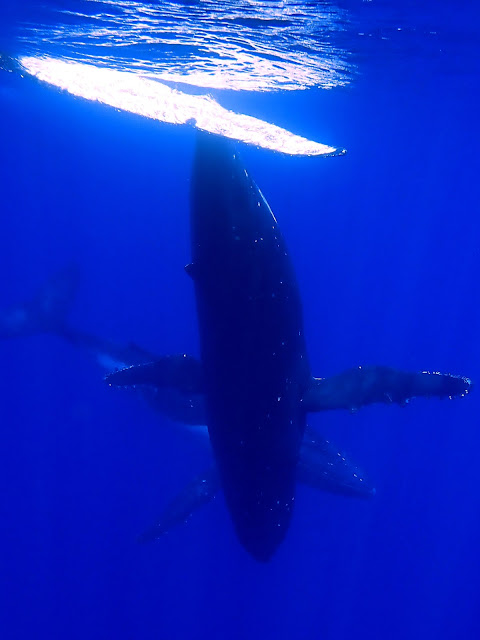 Our first attempt at sighting whales was in the presence of three other large groups of tourists from competing whale watching companies.  Somehow we had expected to be on our own. The disappointment was palpable when instead of whales ahead of us, we saw tourist boats and groups of people in the water.  Heads up and looking cold.
It was explained to us that to swim with the whales we had to wait for the sleeping creatures to take a breath, something that might take 30 to 40 minutes, so that we would know where they were.  When they breached, we would expect to see them before they returned to sleeping vertically underwater.  This would be the chance to enter the water and hover over them, looking down some twenty metres to see the shadowy creatures below us.  It all seemed unlikely but we sat in expectation and we waited and waited.  Nothing, and then we heard on the radio that the visibility was poor so that previous sightings had not been very good.  Over forty minutes passed, there were too many people and the whales had gone.  Our guide had had enough, this was wasting time.  The engine of our launch reared into action, we were off leaving the other tour groups still bobbing in the water.   Was this it? 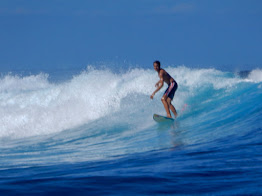 Our next stop was to see the dolphins in one of the passes through the coral reef but this also proved unsuccessful.  We were, though, able to enjoy more humans in the water. This time in rather more impressive poses than the ones we had recently left behind.  Two out of two failures. We really were going to have to return another day.   After continuing further around the island, the guide thought he saw a whale breaching, and our small craft accelerated towards the apparent sighting. Two more sightings were made still some way off.  We arrived and started the waiting game again.
A shout, a change in colour of the water had been spotted, and right beside the boat first one and then a second humpback whale breached. 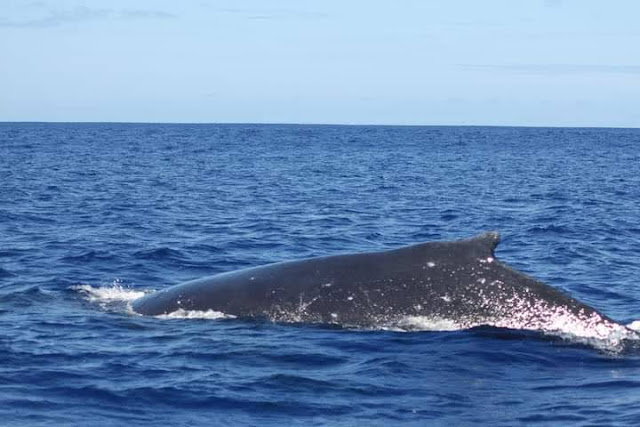 They were moving fast so there was no chance to enter the water to swim with them.  How could one seriously snorkel close to a whale, these were wild animals and the ocean spread out in front of us was no swimming pool.  I would have been happy to settle for another close-up experience of the breaching whales, or maybe if we were lucky a tail flick. 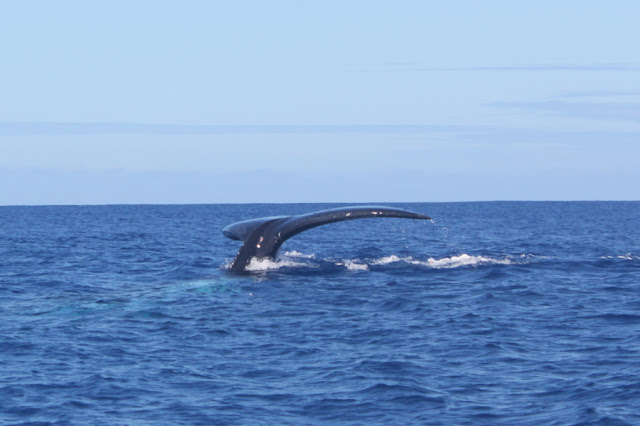 We waited.  Silence and then with the engines running full speed we rushed to where the whales breached again.   "Get ready", we were told, "get in the water, don't make a noise" the guide shouted.
We were fortunate to be in a small group, only five of us and the guide and no one splashing or panicking.  We swam towards the whales but they were moving away.  We could see their shapes getting deeper and further away.   I thought I had lost them but followed the guide, happy to have seen these amazing creatures in their own habitat.  This, I think, was typical of the whale watching experience, these are wild animals, the ocean is not a zoo.
Unusually though the two, now obviously courting whales came back to us, and the magic started.
We experienced something that few will ever get the chance to see, that wildlife programmes take many months to film and then with huge underwater zoom lenses and lighting.  We had no need for these. We spent over thirty minutes in close proximity with these two beautiful creatures.  To see them close up was enough but soon we realised that they were not only courting each other but playing with us.  When the guide and we waved our arms slowly up and down, so the whales rose vertically in front of us waving their flippers in unison. 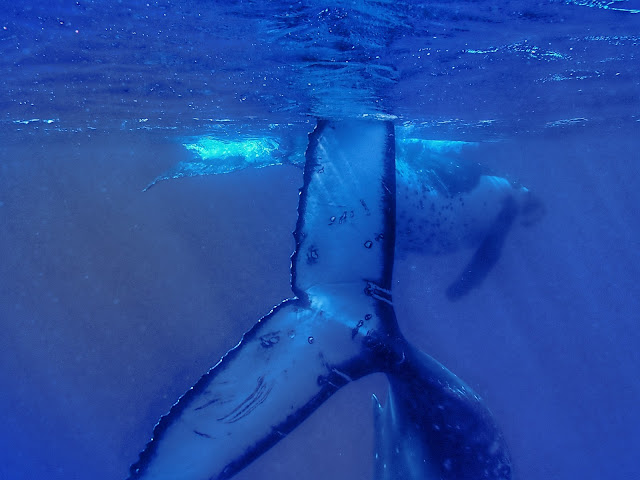 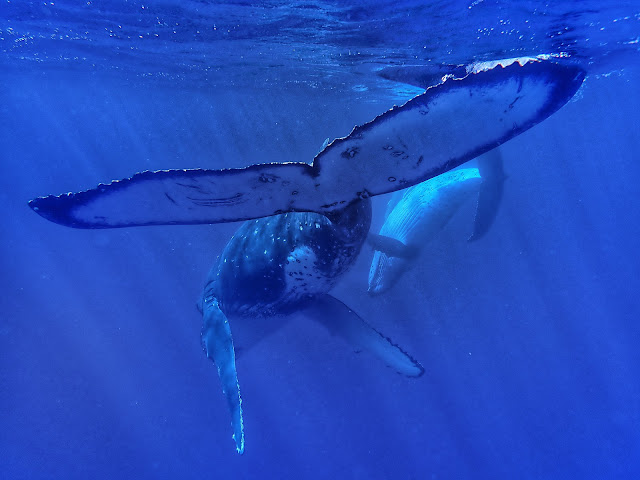 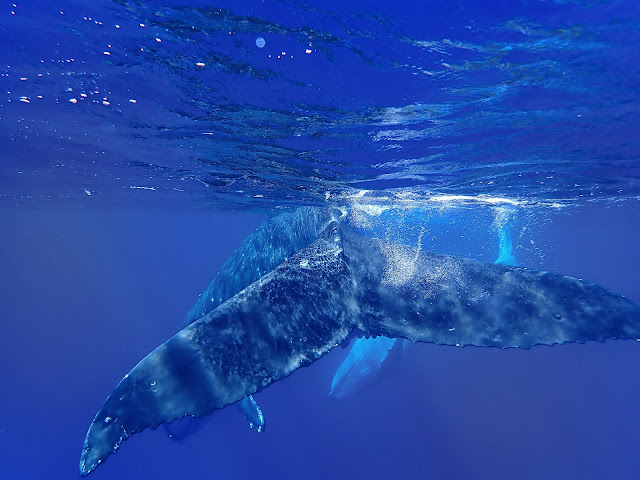 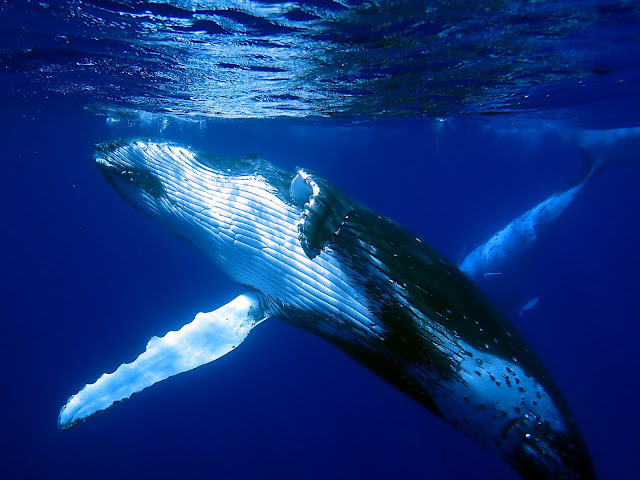 We were even more fortunate to hear the male humpback singing to his mate. Though we cannot prove this, all the males will sing the same song this year.  Next year the song will be different.  The song is passed from one male to another in the tropical waters during the mating season and is the largest known example of cultural learning by animals other than humans.  The song appears to originate on the east coast of Australia and moving east over time across the whole of the southern Pacific.
For these wild animals to choose to spend time with us, to be able to communicate with them was something that will live with us forever.   We will work harder to preserve this magnificent species, whose survival depends on us greedy humans not overfishing the Antarctic.
The pair of humpbacks we were privileged to have seen would have travelled over 3,500 miles from the Antarctic to breed or give birth.  They reach maturity after about six to seven years.  The gestation period is around 11.5 months, so the females will return next year to give birth.  Typically they breed every 2 to 3 years.  Here, the mothers have not yet given birth to their calves, something to save for another season.  They will be the last to leave to give the calves the best chance of survival against predators such as killer whales.
Humpback whales are known to interact with other species including dolphins and Southern Right Whales and it seems, when one gets very lucky, humans too. 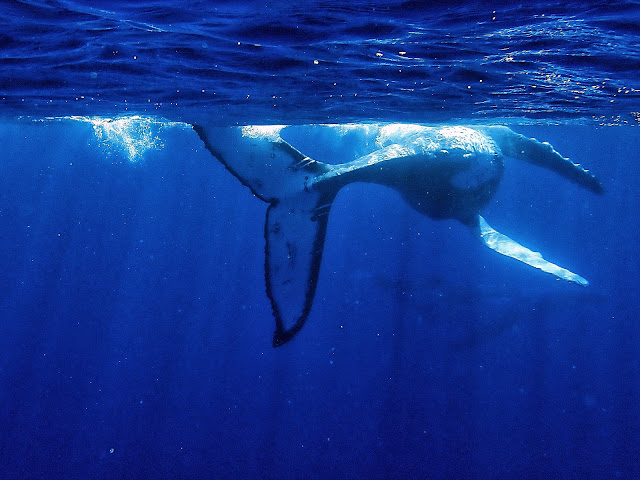 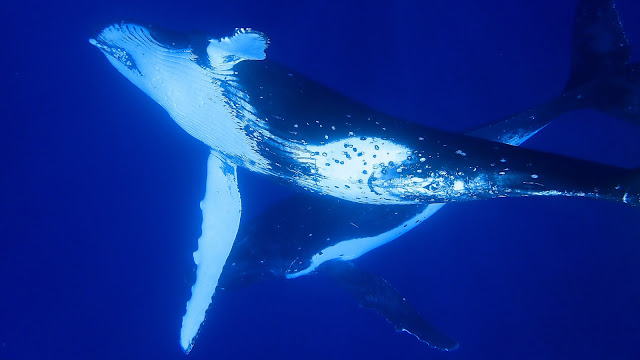 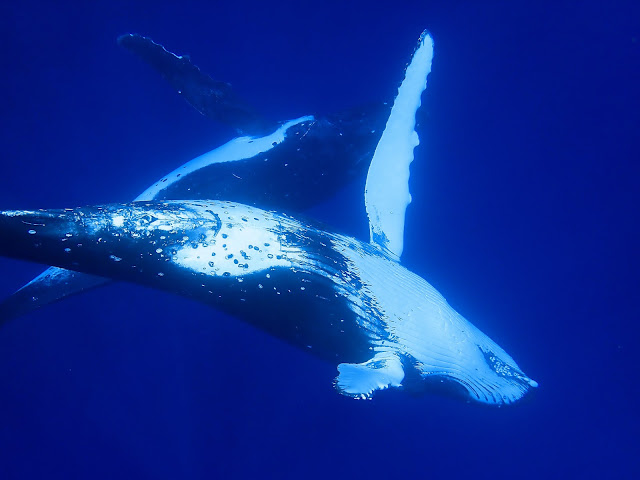 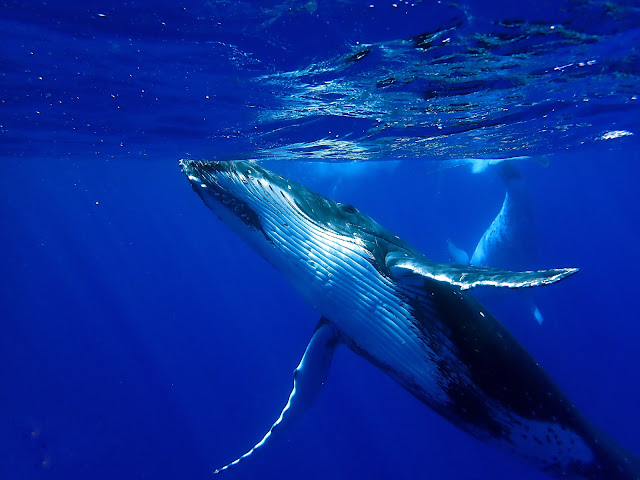 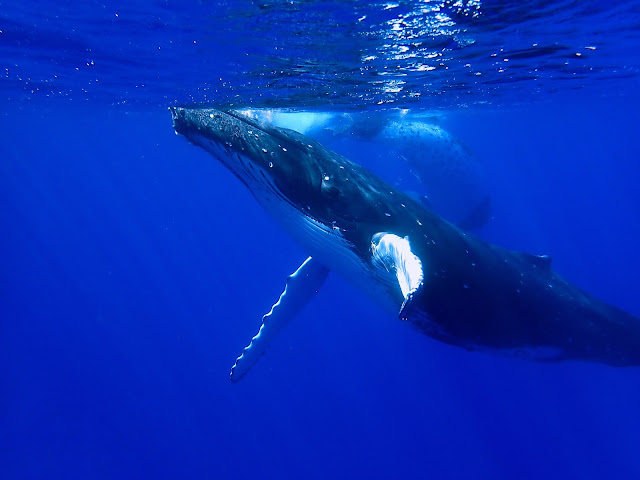 Sharks
Oh, and did we forget to mention that we went swimming with sharks on the same trip. 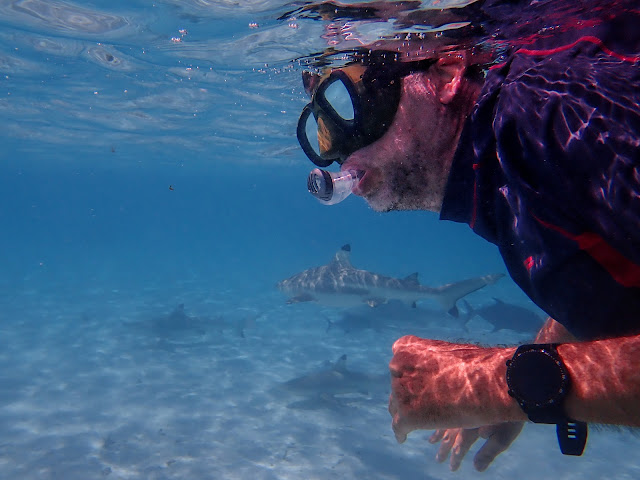 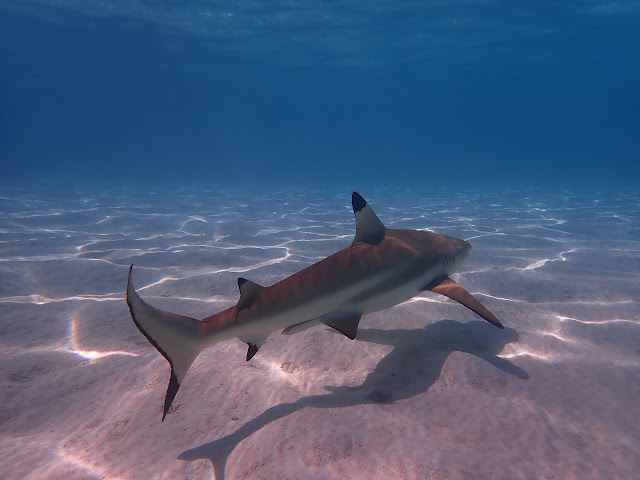 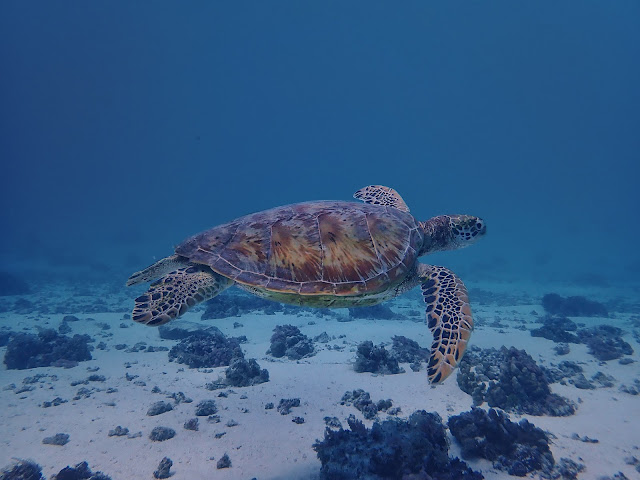 Absolutely stunning pictures and conditions. We are so envious! You certainly deserve this dose of good luck and we wish you many more such magical moments with nature.